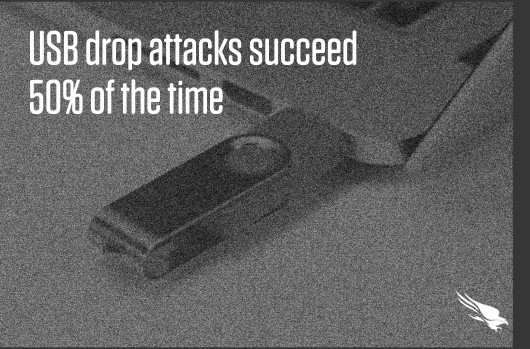 Written by Damien Lewke of Crowdstrike

Social engineering continues to be exploited by hackers and feared by security teams. Due to attackers’ subtlety and users’ natural curiosity, hackers succeed daily in baiting users to click on a link or answer a phishing email.  Baiting is a highly successful technique that relies on an organization’s weakest security link: the end user. This type of attack is so effective that it is used in over half of all successful breach attempts today.

A favorite variant of baiting is the “USB” drop attack, which involves tricking a user into physically picking up a malware-loaded USB device and plugging it into an endpoint. This attack is particularly devastating because removable media can breach any network, from a university to the international space station.

The malicious reprogramming and dropping of a USB device can be accomplished in three ways:

Security teams are faced with a dilemma: how to safely enable USB devices while reducing the risks they pose. The traditional response has been to either ban all USB devices, or manage them with a device control solution that determines which devices can access an endpoint. Unfortunately, these solutions come up short. USB-related breaches have increased 8 percent year over year and now account for almost one-third of all breaches.

Neither solution provides immediate visibility into which devices are in use and where, leaving security teams lacking the necessary knowledge to enforce and manage accurate USB device control policies. As a result, social engineers are thrilled because it leaves the door wide open for opportunistic baiting attacks.

CrowdStrike®’s Falcon® Device Control™ can reduce the risk of baiting via USB drop attacks by providing unparalleled visibility and granular control over USB devices. This device control solution is superior to existing standalone and endpoint suite offerings because it provides full EDR capabilities seamlessly delivered via the lightweight Falcon agent. Security teams are immediately able to see which devices are in use and where, throughout their environment.

Armed with these capabilities, security teams can effectively address USB device risks, including the dreaded USB drop attack. If a user unknowingly plugs a malicious USB device into an endpoint, a security team can use Falcon Device Control to immediately see the event, act to stop it right away, then prevent it in the future