Cloud security company Zscaler, Inc., celebrated a major milestone on Friday, March 16, 2018 making its debut on the Nasdaq. The now publicly traded company (under the symbol ZS) develops a software-as-a-service based cloud security platform that secures access for users and devices to internet applications. The Zscaler IP is a major milestone for the eleven year old company.

Zscaler, which was incorporated in 2007 and headquartered in San Jose, California, operates its integrated cloud-delivered internet security solutions globally. Zscaler’s 100 data centers across the globe act like a series of security checkpoints through which companies can securely run their traffic.

“Zscaler truly represents what it means to be a Nasdaq listed company: a visionary, a game changer, and an innovator.”
Nelson Griggs, Nasdaq Stock Exchange President

“Every successful company starts with a bold idea, but it’s execution is more important than the idea. And the team plays the biggest role in making it happen.”
Jay Chaudhry, Zscaler CEO and Founder

Mr Chaudhry is a serial entrepreneur with a long history in technology. He has started six companies, with Zscaler being his latest venture.  Most of the companies were created to help customers deal with computer-related security threats.  In addition to founding SecureIT, Air2Web, CipherTrust, CoreHarbor and AirDefense, Mr Chaudhry was vice president and general manager of VeriSign’s security services division, and held sales and marketing management positions at NCR, IBM, Unisys and IQ Software.

“What a bold dream. What an amazing journey and a very rewarding outcome”, said Jay Chaudhry at the IPO launch.  Mr Chaudhry grew up in a small village of around 800 people in India’s Himalayan foothills.  In a past interview, he recounts arriving in the U.S. as a student with just two handbags to pursue his Master’s degrees in computer engineering, industrial engineering and business administration from the University of Cincinnati.  Today (as at the time of writing this post) his company’s market capitalization stands at $3.25 Billion. 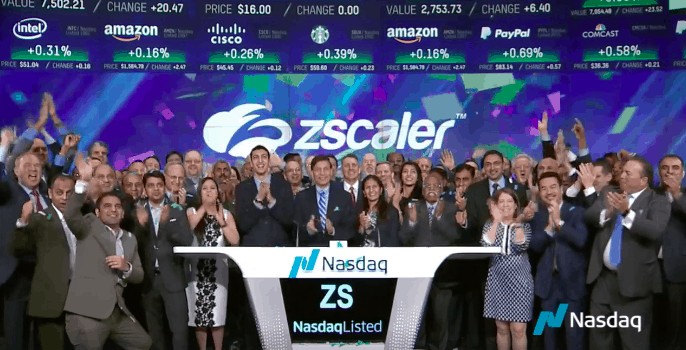 The Zscaler IPO is the first initial public offering of a tech “unicorn” in 2018. The unicorn designation applies to companies that have a private market valuation above $1 billion, before their IPO.  Zscaler had a pre-IPO market valuation of about $1.64 billion at $16 per share.  The company’s shares and valuation more than doubled on IPO day, surging 106% to close at $33 per share on volume of 16.8 million shares. This gave Zscaler a market cap of $3.87 billion.  The phenomenal opening is a testament to investor confidence in Zscaler and the demand for Zscaler’s innovative solutions to the problem of cybersecurity business risks, which have significantly increased the internet and cloud services.

“It’s been incredible to watch [Jay] and the team grow as Zscaler today stands as the default security system for the internet and the pre-eminent cloud security company in the world.”
Nelson Griggs, Nasdaq Stock Exchange President

Zscaler is a leader and pioneering developer of cloud-based network security for businesses, with 2,800 global customers.  As more enterprise applications move to the cloud, the internet has become a de facto corporate network and businesses can no longer rely solely upon traditional network security.  Zscaler is fulfilling the needs of businesses to secure their operations in the cloud.  The traditional firewalls and “moat” system of securing corporate networks is no longer relevant in today’s internet and mobile first world of remote workers.

Ascension Global Technology is proud to partner with Zscaler, offering our clients access to this best-in-class cloud-security solution. Contact AGT for more information on how Zscaler can fit in your overall enterprise security strategy.

Watch The Video Of Zscaler Ringing The Nasdaq Opening Bell

Ready to Improve Your Cloud Security?